A story about Jack and Arnie–no, not that Jack, this one is my dad. 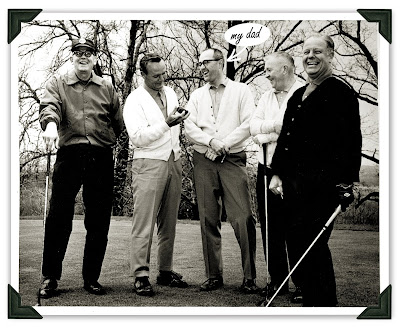 You may be wondering, who is this Jack and how did he come to be playing golf with Arnold Palmer? Did he play professionally? Not hardly, my dad liked golf but I think it was more a course in frustration than anything. I was just out of college and had only started playing golf when I went for a visit to see my Dad. My dad and stepmom Jeanne were living in Huntsville, Alabama at the time and belonged to Valley Hill Golf Club. We were playing golf one afternoon, when after a particularly bad shot my dad made, we were treated to a round of expletives followed by the sound of a shaft snapping on a perfectly good wedge. Not long after that he gave up golf and concentrated on tennis.

Anyway, back to the story, my dad was working at SASCO back then – that’s the Sunbeam Appliance Service Company. SASCO advertised their business in the Yellow Pages and apparently did a lot of it. To thank their premium customers, the Yellow Pages hosted an event at Latrobe Country Club in Pennsylvania. For those of you who aren’t golf enthusiasts Latrobe is the golf club of all golf clubs. This is the course that Palmer’s father helped design and create, and where Arnie grew up playing. How many golfers get the chance to walk the same fairways and greens where Arnold Palmer played golf, and do it side by side with the King? This would be the experience of a lifetime.

Twenty-four top-level executives from companies all over the country were invited to the three-day event, my dad being one of those lucky few. This was in the late 60’s, so by that time Palmer had won, oh let’s say a handful of tournaments. My dad got to play nine holes with the golf great. And that evening Arnie, and his wife Winnie, invited the group to a dinner party at their home. Dad said there was a large A-frame structure on their property that Arnold used for research and testing of equipment–clubs, shafts, etc. Dad remembers it as quite an elaborate setup and he was treated to a personal tour of the place by Arnie that night. The Palmers were the quintessential hosts and everything–food, drink, company–was well above par.

Dad couldn’t tell you the names of the people he met that weekend, after all, it’s over forty years ago and like he says, “I can’t remember what I had for lunch yesterday.” He does recall meeting Mark McCormack, who was Palmer’s agent. For those of you who don’t know him, McCormack was the sport’s marketing pioneer who built IMG, the agency that represents some the biggest names in sports, including a little known golfer by the name of Tiger Woods. Dad has a keen memory of Mr. McCormack, mostly because he lost $100 to him in a poker game that night.

The moment that is captured in the picture the group is on the first tee box and Arnold has my dad’s driver in hand. As the story goes, Arnie was commenting on what a pitiful excuse for a club it was and suggested he try using it as croquet mallet instead, which got a lot of laughs. Dad was not amused. As a result, he sliced his first drive into a tee box on the next fairway startling the foursome about to tee off. I’m not sure the rest of his golf game fared much better that day, but none the less dad had a ball, and he said Arnie was a such down to earth guy, and a good sport!

It was a weekend to remember.